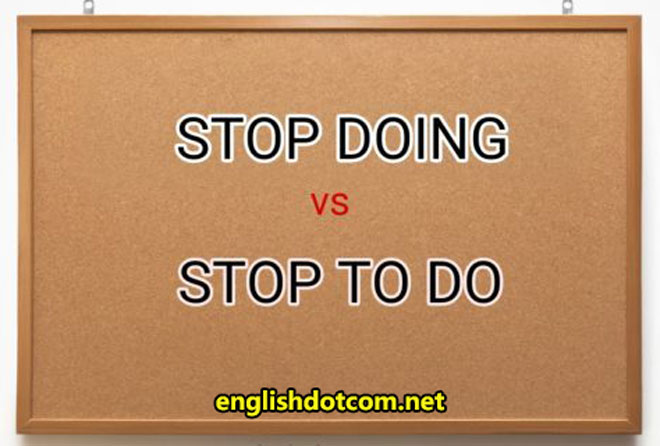 As you can see, stop to do and stop doing (stop doing vs stop to do) have different meanings. The examples below along with explanations will definitely help you have a sound understanding of the difference between the two structures (stop to do vs stop doing).

Have a look at these two sentences.

Sentence 1 means that he was eating lunch and he stopped the action of eating. (maybe he stopped eating his lunch to perform an action like answering the phone, opening the door…)

Sentence 2 means that he was doing something (e.g. driving, working, etc.) and he stopped in order to eat.

Now, look at these two sentences. We have stop + gerund (ing form) and stop + to-infinitive. So what is the difference between ‘I stopped to smoke’ and ‘I stopped smoking.’

Sentence 1 means I used to smoke, but now I don’t smoke anymore. I have given up (= quit) smoking.

Sentence 1 also means I stopped the action of smoking, maybe, to start doing something else.

Sentence 2 means I was doing something but I stopped doing it so as to smoke.  In other words, I stopped for a purpose, which was smoking.

How Do You Use Stop?

Stop Doing or Stop to Do Exercise

What’s the difference between the two sentences below?