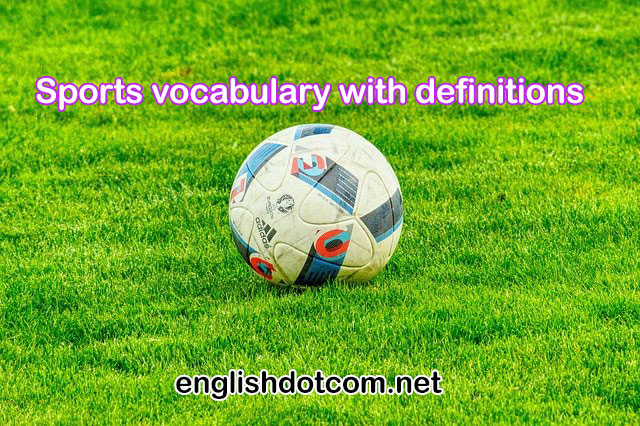 What are words used in sports? What sports are in English?

This post is an essential guide to the most important sports vocabulary with meaning. It is about general sports terms and definitions. (Sport words)

Below is a list of sports vocabulary. The sports words are listed with short and simple definitions.

A person who plays sports

Sports in which people run, jump, or throw things to see who is the best.

Someone who plays a sport

A group of sportsmen who play together.

The leader of a team or group.

A coach is a person who teaches sports.

A person who controls a game.

A person who plays a sport for enjoyment, not as a job.

A person who plays a sport as a paid job. Someone who earns money for doing a sport is a professional.

A formal contest or game.

The act of kicking or hitting the ball into the goal; a point that is scored for this.

People who are watching a sporting event.

People who admire or enjoy watching a game like football. (Football fans)

People who support a player or a sports team. (Football supporters).

A number of goals or points each player or team has.

In most sports, a score of zero is called “nil”. However, in tennis and table tennis, it’s called “love”.

A prize, shaped like a bowl, usually made of gold or silver.

A piece of metal, usually round or shaped like a cross, given to someone who has won a game or contest.

A competition or game in which people compete.

The laws of a game or contest.

A sports competition. ( A tennis tournament)

A competitor that has defeated all others in a game or contest.

A prize, a payment, etc. given to someone in recognition of an achievement

To run or play sports so that you can be healthy.

To prepare for a sports event by exercising. (He’s training for the race.)

To take the initiative in a contest, game, etc. to attempt to score a goal or point.

To try to prevent your opponent from scoring a goal or point.

To show that you like someone or something. (The coach praised the player for scoring a brilliant goal.)

To continue or go on for an amount of time. (The football match lasted for about 2 hours.)

To gain or achieve a point or a goal in a game.

To be victorious or come first in a contest, a race, etc.

To fail to win a game, a contest, etc.

If you beat someone in a contest, a competition, a game, etc., you win.

To win a victory over a player or team in a competition or game.

To end a game or match with an equal result, so that no one wins.

To want a team, a player, a group, etc. to succeed/win.

To encourage a player or a team by shouting.

To take part in a competition or contest.

To give someone an award.

The referee whistles when the players break the game rules.

Sports vocabulary / sport words: Places where you play or do sports

The place where you play tennis.

A large area of land where you can play golf.

A piece of land with special surfaces for people, cars, motorcycles, etc to have races on. ( a running track for example).

An area of water that has been designed for people to swim in.

An area of land that is part of a mountain where you can go skiing.

A square area on a platform, marked off by ropes, where boxers or wrestlers fight.

A specially prepared flat surface of ice where you can ice skate.