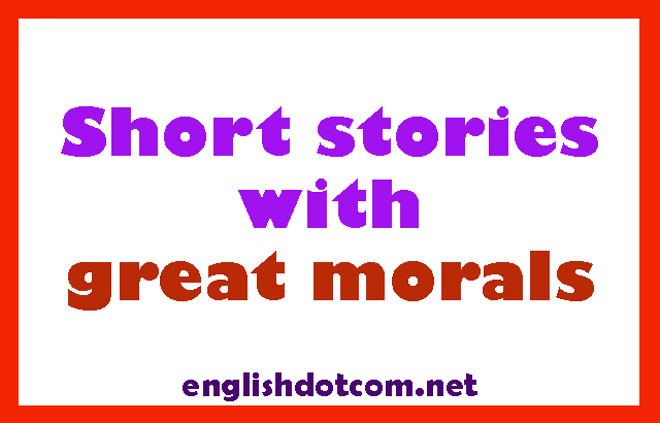 He couldn’t stand seeing the bigger piece of meat in the other dog’s mouth. He wanted to get that meat for himself and he jumped at the other reflected dog, trying to grab away the meat from the supposed rival.

Do you know what happened?? The greedy dog was left without his own piece of meat. Of course, he was also without the other piece of meat as it did not really exist.

It was just a reflection of his own piece of meat. Unfortunately, the real piece of meat that he was carrying had fallen into the river and was washed away.

Being envious of others’ luck could cause you to lose what you have already achieved with difficulty.

One day, a wolf was walking through the countryside and he saw a field of grain. As wolves do not eat grain, he carried on walking.

A few minutes later, he came across a horse. He finally saw something to eat! He came closer to the horse in a friendly manner and decided to show him the nice field of grain that he had just passed by, telling him how delicious that field had looked.

The wolf added that he could have eaten the grain himself, but he wanted one of his good friends to eat first from the field.

The horse was listening carefully and imagining the bad intentions of the wolf. He answered: ”Um if I had known that wolves eat grain, I would have believed what you are saying. But since I know it is not like this, thanks for nothing…”

These very short stories with morals are good for students and children in general.

The lion and the mouse story

Here are other very short stories with morals that you may like.

link to Is Are a Verb: Is Are a Linking Verb? Is Are a Helping Verb?