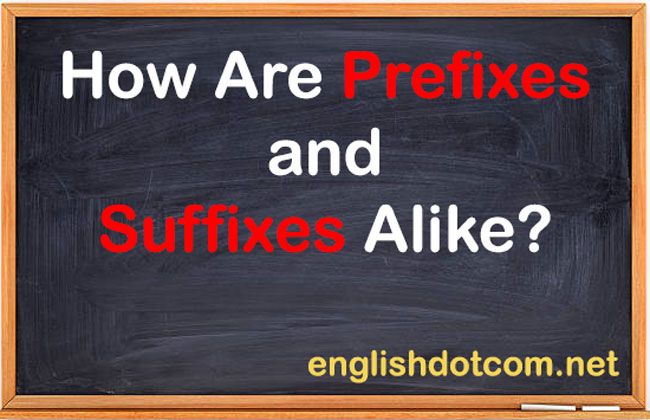 How are prefixes and suffixes alike? What is the similarity and difference between prefix and suffix?

Both prefixes and suffixes are a type of affix and both of them can change a word’s meaning.

An affix is a letter or group of lettres that can be added to the beginning or end of a word to change its meaning. The prefix im- in the word impossible and the suffix -less in the word effortless are affixes.

How Are Prefixes and Suffixes Alike?

Both are a type of affix and both can change a word’s meaning.

A prefix and suffix are both an affix

Prefixes are letters that can be added to the beginning of a word to form a new word. A prefix can change the word’s meaning.

The table below shows the 10 most common prefixes and their meaning and prefixes examples.

The table and the poster above show over 20 examples of prefixes and their meaning as well as examples.

What Are the 10 Examples of Suffix?

Suffixes are letters added to the end of a word to make a new word. Suffixes change the word’s meaning.

The suffix of a word can sometimes show what part of speech the word is.

Suffixes can also change the part of speech.

In English, some words can take more than one kind of suffix to give different meanings.

The table below displays suffixes, their meaning and suffixes examples.

How Are Prefixes and Suffixes Alike?

The sentences below show that both prefixes and suffixes are a type of affix that can change the word’s meaning. Also, suffixes change word class.

Here is a list of words with a prefix and suffix and a root.

Fill in the blanks with the correct prefix.

Fill in the blanks with the right suffix.