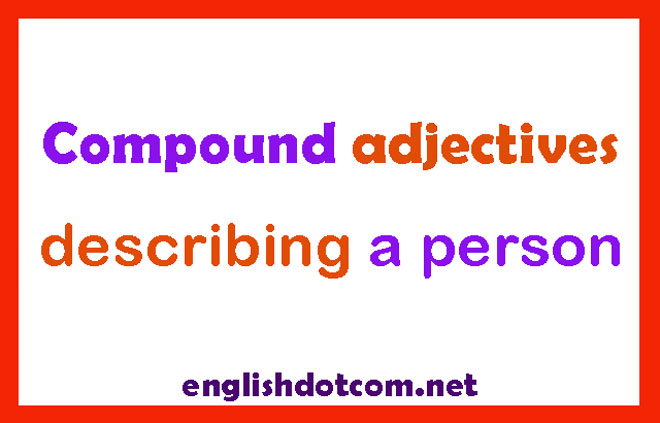 Compound Adjectives to Describe a Person

A compound adjective (also called compound modifier) is made up of two or more words that work jointly to modify the same noun.

When compound adjectives are used before the noun they modify, they are usually hyphenated (joined together by a hyphen).

‘Hard-working’ and ‘well-known’ are examples of compound adjectives. They can be used to modify or describe a noun. For example, we can say:

Notice that the adjective ‘hard-working’ is made up of two words, that is why it is called a COMPOUND adjective. Notice, also, that this compound adjective describes or modifies the noun ‘people’. So it is hyphenated.

Compound adjectives whose first part is self are hyphenated as well. The words joined together by a hyphen are also known as hyphenated words. Below is a list of hyphenated words to describe someone.

As you can notice, the tables above show that a compound adjective can be formed by different parts of speech and cannot be defined by the words it contains. In brief, when two or more words are together to describe a noun, they make a compound adjective.

This list contains a number of compound adjectives examples that can describe a person along with meaning.

A hard-working person always does a lot of work.

Naturally friendly and does not get angry easily.

Too sure about yourself and your abilities.

Very determined to do what you want to do.

Not determined enough to succeed in what you want to do.

Somebody who is strong-minded is not willing to change their opinions and beliefs.

Happy to accept ideas and ways of life different from your own.

Willing to accept opinions and ideas which are different from yours.

Not willing to accept ideas or ways of behaving that are different from your own.

If someone is short-tempered, he or she gets angry easily for no good reason.

Calm and relaxed; not easily worried or upset.

You think you are more intelligent or more important than you really are.

If you are thick-skinned, you are not easily hurt by criticism.

If you are cold-hearted, you don’t feel sorry about other people’s suffering.

Calm and sensible; able to make good decisions even in difficult situations.

You are not usually worried about other people’s behavior or things that need to be done.

Compound Adjectives Personality with Self

Compound adjectives with self are usually hyphenated. These adjectives describe personality or character.

You have confidence in your own abilities.

Behave in a quiet and polite way.

uncomfortable or nervous because you are worried about what other people think about you or your behavior.

Adjectives to Describe a Person

Here is a list of adjectives to describe a person:

Other Adjectives That Describe Person

Do this character adjectives quiz here to test your knowledge of compound adjectives.

This list of compound adjectives to describe a person is not exhaustive.